Our research published this week in Scientific Reports reported effective conservation strategies that can mitigate the impacts of climate warming on sea turtle nesting success, #oceanoptimism.

Lead scientist Dr Nicole Esteban from Swansea University Sea tells that turtles do not have sex chromosomes. It is the incubation temperature in sand surrounding a clutch of eggs that determines the sex of a turtle hatchling which is known as Temperature-Dependent Sex Determination. Eggs incubating at cooler temperatures (generally lower than 29 °C) produce male turtles and eggs incubating at warmer temperatures produce females.  This has led to concerns that, in the context of climate change, warming air temperatures may lead to female-biased sea turtle populations. “Our previous work in St Eustatius showed that incubation temperatures are relatively high (mean of 31°C) so that the majority of turtle hatchlings born at these beaches have been female biased during the past decades. There is therefore a real concern that not enough male hatchlings would be born on the beaches in future to sustain the local population and we decided to investigate options for conservation actions to reduce incubation temperatures”.

The research team developed a series of trial experiments to test the effect of various shading treatments that were easily available (white sand, white sheet, palm leaves). The sand temperatures below the shaded areas were recorded using small temperature loggers buried at turtle nesting depths on Zeelandia and Oranjebaai beaches in St Eustatius. The data were combined with long-term beach temperature data to estimate the effect of shading and relocation between the beaches on hatchling sex ratios.

Marjolijn Christianen, collaborator from Wageningen University & Research says: “The results of the study surprised us. They show that simple measure can be very effective in preventing a female-only turtle population. The most effective shading material is palm leaves, decreasing temperature by a mean of 0.6 °C. Variation between beaches that are only 1 km apart was an average of 1.9 °C. Relocation between beaches and shading could shift hatchling sex ratio from the current ranges (97-100% female) to 60-90% female. A giant difference!”.  In the study a conservation mitigation matrix is presented that summarize evidence that artificial shading and nest relocation can be effective, low-cost, low-technology conservation strategies to mitigate impacts of climate warming for sea turtles.

This research underlines that there is real need for effective conservation measures to be put in place to prevent the localised extinction of these turtle populations in St Eustatius. says the Marine Park Manager Jessica Berkel. “We are planning to relocate turtle clutches to the cooler beach and have already trialed relocation of turtle eggs to a cooler site.” 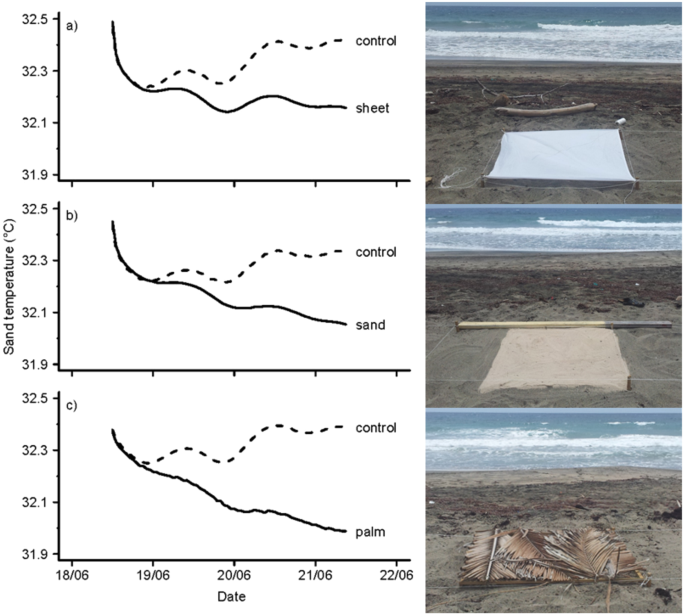 Below: Green turtle hatchling about to head out to sea. (photo courtesy of Banco de Imagem – Projeto Tamar) 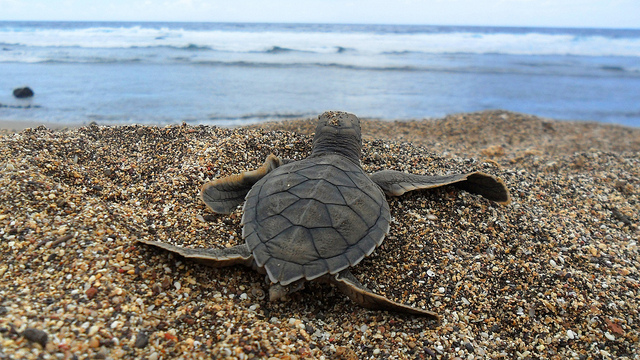