In January, National Geographic Indonesia published a very nice map about the important habitats for the green turtles in the Derawan Archipelago. See low resolution map below. The Editor in chief visited Derawan and interviewed all goverment NGO’s and researchers (me) having something to do with the green turtles in November and he made a good review about the most important turtle issues. Below the map you can find the text were I was quoted.

Unfortunately just after NG left, another big threat to the turtles in the area became clear. Over 100 turtles got stuck in a >1000m net in front of Maratua Island, clearly set out to catch turtles specifically.  You can read more in the article of Frank Zindel. The last 4 years a turtle net (big mesh sized) was found on 4 occasions in this area and killed a hudge number of turtles: ±150 dead turtles in 2005, ±400 in 2007, ±100 november 2009, ±15 December 2009 and the Chinese illegal poaching can still continue until the local authorities have enough resources to patrol regularly in the area. 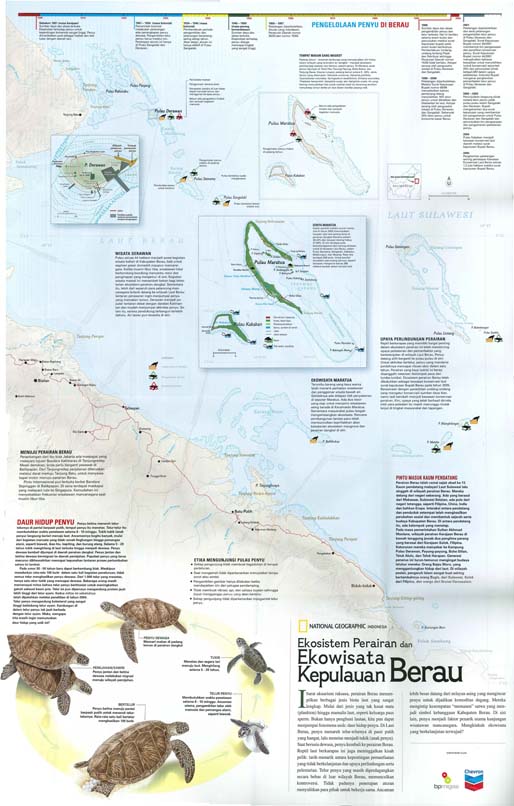 Translated (thanks google translate) from the text of NG Januari.…”Marjolijn christianen, a Dutch researcher who pursues seagrass in waters off the island, conveys her worries about many sea turtles that are run over by fast speedboats in the shallow water area were the banana boat attracks a lot of tourists. Turtle carapaces are scratched when they are hit by the engine propeller of the fast speed boat. This propellor also damaged seagrass beds. Another threat, which is huge but more subtle, is pollution from the mainland and from the island Derawan itself. “I study the interaction of nutrients from river pollution and household waste on seagrass beds and the feeding relationship with the green turtle” Marjolijn explaines. Pollutants bring nutrients that feed algae. The more algae that grow in shallow water prevent sunlight to reach the seagrass, so its growth is reduced. Seagrass is a staple food of sea turtles and may decline as a result of the pollution, seagrass and thus turtles are estimated to continue decreasing.”…..