We explored the southern islands of the Berau Archipelago, Bilangbilangan, Blambangan and Mataha in search of more foraging areas for the green turtle.  In January 2010 National geographic Indonesia published a map + article on the green turtle in Berau. Turtle foundation is conserving the nesting beaches on these Islands and has posts on Bilangbilangan and Mataha were some very commited staff guards the turtle eggs. And you directly see the effect: On the Island without conservation posts eggs are stolen. A boat with poachers was directly fleeing when we arrived at Blambangan with our speedboat. This is the picture of a fresh egg forgotten by poachers that dug out the rest of the nest. 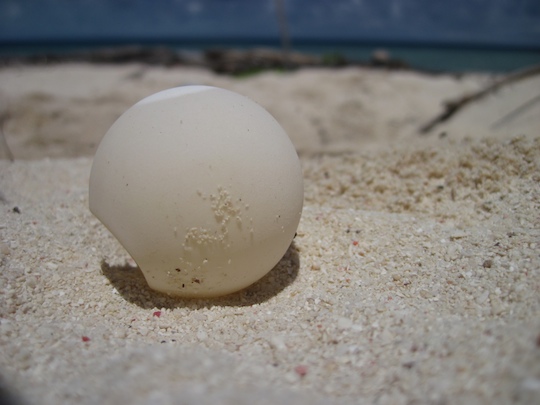 While egg harvesting is forbidden for some years in Indonesia local government creates their own rules and along the roadside of Samarinda and even on the local market of Berau you can still buy the ping-pong-ball-shaped green turtle eggs. Eggs are most likely from the few islands without conservation posts like Blambangan.

In the rainy season and the rest of the northeastern monsoon the number of females per night laying eggs is less but on the islands we visited it wasn’t difficult to spot them (there were still 7 that night) and in the afternoon we also encountered mysterious spots of moving sand after which more than 100 tukik per nest emerged. It is like Kill Bill 100-fold!

Like all organisms turtles development of hatchlings also sometimes fails. Here the TF guards showed us a tukik (Indonesian for hatchling) without legs and a hatchling with 2 heads.

When we arrived back we want to measure the population size of the green turtles in the area so we recaptured a lot of green turtles by rodeo method to check for tags.

All with help of Dodi, Jeffrey, Tiar and Darjon, who normally also help WWF/TNC. We used waterproof marker to prevent recapturing the same turtle. 1 of the turtles missed part of his front flipper (@pic right below). We also encountered a lot of turtles with cuts in their carapace (below-left), presumably caused by speeding speedboats around the island. If you see a turtle with tagnr 2722.. – 2725.. email me!